One of the most important but often misunderstood features of underwater camera housings is the lens port. The planar port was all that was available for underwater photography from 1893 until 1931, when the hemispherical domed port was first used to correct for the refractive properties of water. Both planar and domed ports have a place in underwater photography, and it is important to understand the theory and practice of each. For underwater photography with wide-angle lenses, the dome port is the best choice, but if starting or ending a shot on the surface, or if you need to use a long lens for close-ups, you should use the flat port. 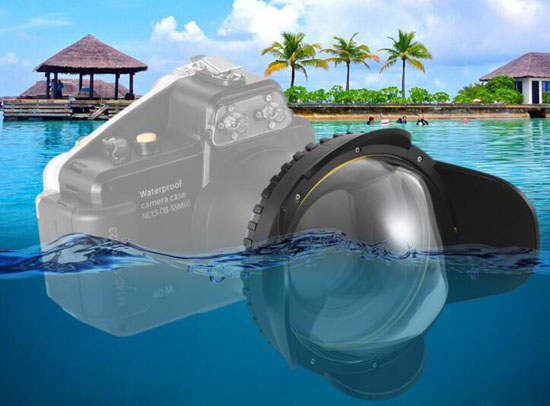 Flat ports - Flat ports do not correct for distortion caused by differences in light refraction index between air and water. When used underwater, the use of a flat port introduces many aberrations. They are

Refraction - This is the bending of light waves as they pass through media with different optical densities (air inside the camera housing and water outside the lens port). Light is refracted by 25%, causing the lens to experience the same magnification as seen through the mask. The focal length of the lens is also increased by approximately 25%.

Radial Aberration - Because the flat ports do not distort light evenly, they have progressive radial aberration that becomes more pronounced when wider lenses are used. The effect is a progressive blur that increases with larger apertures on wide-angle lenses. Light rays passing through the center of the port are unaffected because they propagate at right angles to the water-air interface of the port.

Chromatic aberration- White light is separated into a color spectrum during refraction. The component colors of white light travel at different speeds, and the light is bent unevenly from water to glass to air. As the light separates into its component colors, the different colors overlap slightly, resulting in a loss of sharpness and color saturation, which is more noticeable when using wider lenses.

Dome Port - A dome port is a concentric lens that is used as an additional optical element to the camera lens. When the curvature of the center of the radius inside the dome is as close as possible to the node of the lens, the dome port significantly reduces refraction, radial aberrations, and axial and chromatic aberration problems. When using the dome port, all light is not refracted, allowing the "aerial" lens to maintain its angle of view. Optically, a "virtual image" is created a few inches in front of the lens. To use the dome port to photograph an underwater subject, you must focus the lens on the virtual image" rather than on the subject itself. The dome port makes the lens markings on the lens completely inaccurate for underwater focusing. Therefore the lens should be calibrated underwater.

Previous: What's the difference between silver mirror and aluminium mirror?

Next: An overview of Fused Silica