An overview of Fused Silica

Fused silica is amorphous silicon dioxide. It can be obtained e.g. by melting silica powder such that the grains are fused together, and cooling it down fast enough to avoid crystallization. Fused silica in a more or less purified form belongs to the most important optical glasses, or more generally optical materials, both for a wide range of bulk optical components and in fiber optics.

There is also a variety of silicate glasses, which have fused silica as their main component but contain additional substances such as soda, alumina, germania or lime. They generally have much lower glass transition temperatures and also differ from pure silica in many other respects, e.g. in terms of the transparency range and the thermal expansion coefficient.

Fused silica is sometimes called fused quartz or quartz glass. However, it should be kept in mind that it is an amorphous material, while quartz is crystalline. (When lamps are said to have a quartz envelope, it is always fused silica; the same holds for most “quartz tubes”.) Other common names are silica glass and vitreous silica.

While silica has a very wide range of industrial and other applications, this article focuses mainly on optical properties and applications. 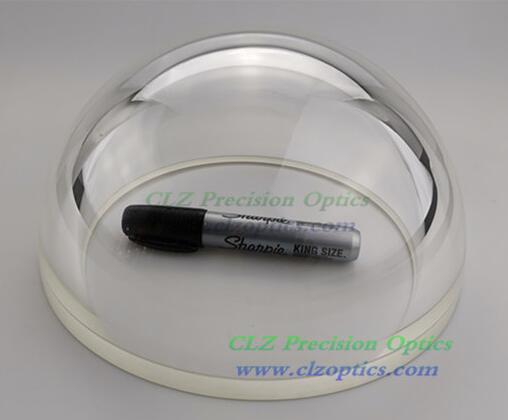 ◬It is hard and robust, and not too difficult to machine and polish. (One may also apply laser micromachining.)

◬The high glass transition temperature makes it more difficult to melt than other optical glasses, but it also implies that relatively high operation temperatures are possible. However, fused silica may exhibit devitrification (local crystallization in the form of cristobalite) above 1100 °C, particularly under the influence of certain trace impurities, and this would spoil the optical properties.

◬The thermal expansion coefficient is very low – about 0.5 · 10−6 K−1. This is several times lower than for typical glasses. Even far weaker thermal expansion around 10−8 K−1 is possible with a modified form of fused silica with some titanium dioxide, introduced by Corning [4] and called ultra low expansion glass.

◬The high thermal shock resistance is a result of the weak thermal expansion; there is only moderate mechanical stress even when high temperature gradients occur due to rapid cooling.

◬Silica can be chemically very pure, depending on the fabrication method (see below).

◬Silica is chemically quite inert, with the exception of hydrofluoric acid and strongly alkaline solutions. At elevated temperatures, it is also somewhat soluble in water (substantially more than crystalline quartz).

◬The transparency region is quite wide (about 0.18 μm to 3 μm), allowing the use of fused silica not only throughout the complete visible spectral region, but also in the ultraviolet and infrared. However, the limits substantially depend on the material quality. For example, strong infrared absorption bands can be caused by OH content, and UV absorption from metallic impurities (see below).

◬As an amorphous material, fused silica is optically isotropic – in contrast to crystalline quartz. This implies that it has no birefringence, and its refractive index (see Figure 1) can be characterized with a single Sellmeier formula. 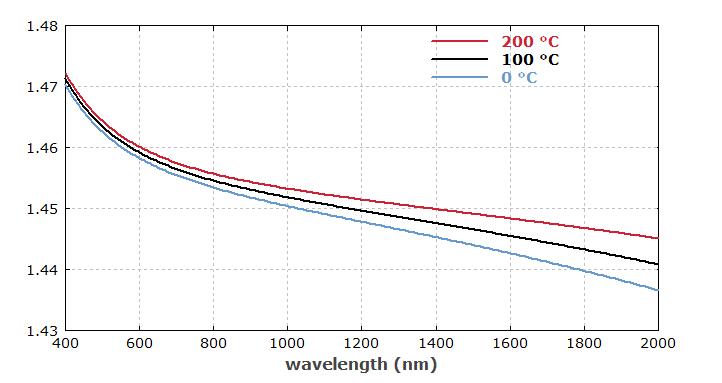 Figure 1: The refractive index of fused silica versus wavelength at three different temperatures.

◬The nonlinear index of fused silica is one of the lowest of all optical materials.

◬For some applications, the high radiation resistance of pure fused silica is relevant.

◬The high phonon energies (resulting from the light elements Si and O) lead to strong non-radiative transitions of integrated rare earth ions, which is beneficial in some cases but excludes the use of fused silica in other cases.

Fused silica can made by melting some solid form of silica and cooling the melt sufficiently fast to avoid crystallization. A quite high temperature around 1650 to 1700 °C is needed – far above the glass transition temperature of many common optical glasses. The required heat can be provided by an electrically heated furnace or by a flame (Verneuille process) obtained with some combustion gas mixed with pure oxygen. Contamination with unwanted impurities, which is particularly likely due to the high temperature, should be minimized with a suitable choice of materials, e.g. for crucibles.

One can use natural quartz crystals as the raw material, but this will generally lead to a relatively low material quality because quartz can contain a range of impurities (e.g. aluminum and sodium), which affect the optical properties, in particular the transmissivity in certain spectral regions. Therefore, one normally uses some chemically refined silica, which can exhibit a very low concentration of impurities.

Highly purified silica, e.g. for fiber fabrication (more precisely, the fabrication of fiber preforms), can be obtained in a chemical reaction. For example, one can burn silica tetrachloride (SiCl4) in a hydrogen–oxygen flame, where the oxygen combines with the silicon and the chlorine escapes in the form of HCl. The resulting synthetic silica is deposited in the form of a very fine powder (dust), which then can be fused to obtain solid material. It may exhibit substantial OH content, but a very low level of metallic impurities. In order to minimize OH content of the obtained silica for application in infrared optics, one needs to avoid hydrogen by using a vapor-free plasma flame.

There is not simply fused silica of higher or lower quality; it depends on the intended application (see below) what aspect of quality is relevant:

◬Trapped air bubbles and other inclusions of course need to be avoided for any optical applications, except if one wanted to fabricate an optical diffuser. High optical homogeneity is also usually required.

Different grades of fused silica can differ very much e.g. in terms of infrared and UV transmission!

◬For application in infrared optics, it is essential to have a low content of hydroxyl (OH) – often somewhat inappropriately called water content, since it is wrong to assume that the material would contain H2O molecules. An OH content below 10 ppm is typically required for IR-grade fused silica. Substantial absorption bands related to hydroxyl content are around 2.2 μm and 2.7 μm wavelength, but there are also overtone bands e.g. in the 1.4-μm region, which are relevant for the 1.5-μm telecom wavelength band.

◬For applications in the ultraviolet spectral region, other properties are relevant. The UV transmission can be limited by various metallic impurities, which therefore need to be carefully minimized for UV-grade fused silica (while they do not matter much for IR applications). Also, it is important that the material is not substantially degraded by UV irradiation; one requires good solarization resistance, which implies low radiation-induced absorption through color centers. Another possibly important feature is to have low UV-induced fluorescence and phosphorescence.

The fabrication method (see above) must be chosen accordingly. For example, ordinary flame processing would often lead to a too high hydroxyl content for UV applications.

Various trade names are related to the type and application area. For example, Herasil, Homosil, Optosil and Vitreosil are fabricated with flame fusion, exhibit high OH content (around 150 to 400 ppm) and are thus suitable for visible and ultraviolet applications, but usually not in the infrared. Suprasil and Spectrosil are variants made with flame hydrolyzation of SiCl4, having a much lower content of metallic impurities, but also having a high OH content. Very low OH content (possibly well below 1 ppm) is achieved for materials like Infrasil, Suprasil W and Spectrosil WF, made with a water vapor-free plasma flame. Often, such trade names comes with additional numbers for different variants which are optimized for specific applications.

Of course, the surface preparation is another aspect of quality, as generally in optics. Various kinds of specifications can be relevant, e.g. surface flatness and scratch–dig specifications.

Fused silica is used for a wide range of optical components, such as lenses, prisms, optical flats, mirror substrates and diffraction gratings. Key advantages are the broad spectral transmission range, the hardness and low thermal expansion – e.g. for large telescope mirrors, where the possibility to fabricate large pieces is also vital. Fused silica is also used for optical windows, when a high pressure difference between both sides and/or a limited window thickness leads to the requirement of high mechanical strength. For photomasks, the high UV resistance can be important.

Fused silica is also widely used for the envelopes of various kinds of lamps, if those are exposed to high temperatures or high temperature gradients. For example, halogen lamps and various kinds of gas discharge lamps (particularly high intensity discharge lamps) need to be operated with a very hot envelope in order to avoid depositions which would diminish the light output. In some cases, the high ultraviolet transmissivity of fused silica is required; that is particularly the case for excimer lamps. In case of halogen lamps, the high UV transmission is actually often unwanted, and makes necessary the use of additional filter glasses.

Acousto-optic modulators are often based on a piece of fused silica, particularly for high-power laser applications.

In dielectric coatings, fused silica is often used as the low-index material. It can be deposited in a vacuum chamber with electron beam evaporation or ion beam sputtering, for example.

Fused silica is the base material for most optical fibers.

Another important application area is fiber optics. Most optical fibers, including nearly all telecom fibers, are silica fibers. Here, one usually does normally not use pure silica throughout, because an optical fiber usually contains a waveguide structure. A common option is to use pure fused silica for the fiber cladding while having some kind of silicate glass (e.g. germanosilicate) for the fiber core. Particularly for large-core multimode fibers, one may alternatively have a pure-silica core (exhibiting particularly low propagation losses) and a “depressed cladding”, which is typically doped with fluorine in order to obtain a reduced refractive index. Most photonic crystal fibers are made from pure silica.

Because the transmission distances in fibers are often very long (e.g. dozens of kilometers), sufficiently low propagation losses are generally needed, and this requires highly purified forms of silica. Indeed, the development of low-loss fibers, suitable for example for optical fiber communications, first required the identification of relevant impurities and the careful optimization of fabrication processes. See the article on silica fibers for more details.

One can fabricate various other types of waveguides on silica surfaces (or somewhat below). This is important in the context of photonic integrated circuits.

Next: The Advantages of Fused Silica & Quartz