What are the coating classifications for Optical Glass Lenses?

In terms of modern technology applications, optical coatings can be mainly coated on the surface of various materials such as Optical Glass Lenses, plastics, optical fibers, crystals, and so on. As long as the an instrument that needs to use light must have an optical coating, it is an important part of modern optical instruments and various optical devices. Optical Coatings have good robustness, optical stability, low cost, and hardly increase the volume and weight of the material, so it is the preferred method to change the optical parameters of the system. 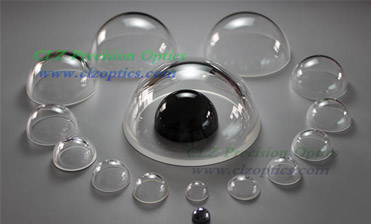 There are many optical instruments used in the visible spectrum region. As far as their output is concerned, they occupy most of the antireflection film, and antireflection processing is required on almost all-optical devices.

Single-layer anti-reflection film is a very widely used film, and it is also the simplest film system. Consider the case of normal incidence, i = 0, and make the substrate surface reflectance completely eliminated at this time. In the case where the incident medium is air, n0 = 1, the most commonly used in the visible light region is a coronal spleen glass with a refractive index of about 1.52. The refractive index of the ideal AR coating is 1.23, but the lowest refractive index of the thin films that can be used so far is 1.38 (magnesium chloride). When designing with the central wavelength of visible light at 550nm, the optical thickness is not a quarter of the wavelength for the light wavelengths in the purple and red wavelength bands, which deviates from the condition of reflection cancellation and has a slightly higher reflection.

A device that divides a beam of light into two parts is called a beamsplitter. The working part of the beam splitter is generally a plane coated with a film, which has a specific reflectance and transmittance in a certain wavelength range. Usually, this plane is inclined, so incident light and reflected light are separated. The specular mirror's predetermined reflectance and transmittance values vary depending on its use.

The reflection of each surface of the crown glass with a refractive index of 1.52 is about 4.2%. Flint glass with a higher refractive index has a more pronounced surface reflection. This surface reflection causes two serious consequences: the loss of light energy reduces the brightness of the image; the surface reflected light has been reflected or diffused multiple times, and some of it becomes stray light, and finally reaches the image plane to reduce the contrast of the image. Complex systems such as quality, especially televisions and movie photography lenses, contain many surfaces adjacent to the air, and their performance will be greatly reduced if they are not coated with an AR coating.

A reflective film is an optical element used to reflect most or almost all of the energy of incident light. In some optical systems, optical elements are required to have a high reflection ability. For example, the mirror of a laser requires a reflectance of more than 90% for monochromatic light of a certain frequency. In order to enhance the reflection energy, a high-reflectivity the transparent film is often plated on the glass surface, and the optical path difference of the reflected light on the upper and lower surfaces of the glass is used to meet the conditions for constructive interference to enhance the reflected light. We are Optical Glass Domes Factory, please contact us if you need.

Previous: Without knowing this, I can't process Optical Glass Domes!

Next: What you need to know about Fused Silica Domes