How Are Lenses Made?

How Are Lenses Made? 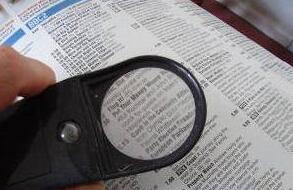 This magnifying glass uses a single convex lens made from plastic.

Until plastics became common in the 20th century, virtually all lenses were made by grinding solid pieces of glass into different shapes. Convex lenses were made by using a concave-shaped grinding tool (and vice-versa), and then the roughly shaped lens was polished to make its final shape. The ordinary glass we use in windows and crockery isn't good enough to use for lenses, because it contains air bubbles and other imperfections. These cause light rays to divert from their correct path, making a fuzzy image or one that makes different colors of light behave in different ways (problems that optical scientists refer to as aberrations). Instead, lenses are made using a more refined material known as optical glass. For eyeglasses, many people now prefer plastic lenses because they're much lighter and safer than optical glass. Plastic lenses can be molded to shape, instead of being ground, so they can be made in huge quantities far more cheaply than glass lenses. Although ordinary plastic scratches easily, it can be coated with a thin layer of a protective material such as diamond-like carbon (DLC) to reduce the risk of damage. Some optical lenses are also coated with thin plastic to reduce annoying reflections. 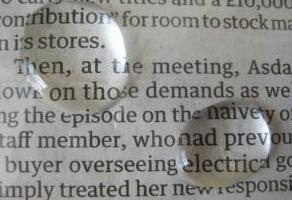 I made this water lens by cutting a small piece of plastic from a grocery bag and laying it over a newspaper. I dropped the water on, very slowly and carefully, using a teaspoon.

Do this in your kitchen or bathroom to avoid making a mess.

2. Lay a small piece of cellophane, cling film, or clear plastic on top of the newspaper. You don't need much—maybe a piece half the size of a paperback book cover.

3. Using an eye-dropper, pipette, syringe, teaspoon, or even the tip of your pinkie, place a single, small drop of water on top of the cling film.

4. Look at the newsprint and you should be able to see that the water drop (which has a curved upper edge and a flat lower edge) magnifies the words.

6. What happens if you make the water drop bigger or smaller? What if you lift the plastic away from the paper and move your lens nearer or further from the print? What other cunning things can you do to change the way your lens works? Like all great scientists, take the chance to play around and experiment.

Does it seem strange to make a lens out of (liquid) water? Would you be so surprised if the lens were made from (solid) ice? Think for a moment and you'll see there's no real difference. Next time you're playing out in the icy winter, maybe see if you can fashion a decent lens out of ice broken from a puddle. If you can, and the ice is clear enough, see if you can use it to magnify something, or bend the rays from a flashlight.

Previous: What Are Lenses for?

Next: Principles of Optical Lenses